GET A QUOTE
Home
About Us
Services
Areas We Cover
Contacts
Emailchiefmovingsd@gmail.com
Phone numbers(858) 228-7900
Get a Quote

Solana Beach was first settled by the San Dieguitos, early Holocene inhabitants of the area. The area was later inhabited by the Kumeyaay, who set up a village they called Kulaumai, on the southern banks of the San Elijo Lagoon. During the Spanish colonial era, trails heading north near Solana Beach crossed inland to avoid the marshes and inlets of the area.

The George H. Jones family were the first European settlers in the area, arriving in 1886. Until 1923, the area had been called Lockwood Mesa. When Lake Hodges Dam was built in 1917–1918, the area began to develop rapidly. The creation of the 12,000-acre (49 km2) Santa Fe Irrigation District in 1918 ensured the area from Rancho Santa Fe through Solana Beach would prosper and expand. The coastline from Solana Beach to Oceanside began to boom in the early 1920s. In 1922, Colonel Ed Fletcher—an early community leader and developer—purchased 140 acres (0.57 km2) at $20 per acre from farmer George H. Jones to develop the town of Solana Beach with the help of his brother-in-law Eugene Batchelder. To provide access to the beach for the development, hydraulic water pressure was used to erode away tons of earth and create the Fletcher Cove entry and beach. This took one man three months with a fire hose, using water that was coming over the spillway at Lake Hodges Dam. The beach was opened with great fanfare, including horse races on the beach on July 4th, 1925.

The community grew slowly but steadily throughout the rest of the century, with particular booms occurring in the decade after World War II and a real estate boom in the last quarter of the 20th century. In 1986, the community incorporated as the city of Solana Beach. That year, the city hosted the final funeral services for Desi Arnaz, who had died in Del Mar. Arnaz’s funeral was held at St. James Roman Catholic Church, one of two Catholic churches in the city and part of the Diocese of San Diego.

The city received national news coverage in 2003 upon becoming the first city in the Continental United States to enact a smoking ban on its public beaches, a trend which has continued as many other coastal California towns have followed suit in banning smoking on their beaches. Solana Beach was the last coastal community in North San Diego County to ban alcohol on the beach, doing so for at least a year in an action unanimously approved by the City Council.

On April 25th, 2008, retired veterinarian and 38-year resident Dr. David Martin, 66 years old, suffered a fatal injury from an extremely rare great white shark bite while swimming with a group approximately 150 yards (140 m) off shore near Solana Beach’s Fletcher Cove. The group of swimmers reportedly began their swim at Tide Beach Park to the north. Surfers in the area of Fletcher Cove noted harbor seals in the water and a wounded seal on the beach just before the attack, the latter being a typical sign of sharks feeding in the area. Recent increases in the seal population along the Southern California coast—and the seals’ tendency to swim in close proximity to human swimmers—are suspected to be contributing factors in the attack. 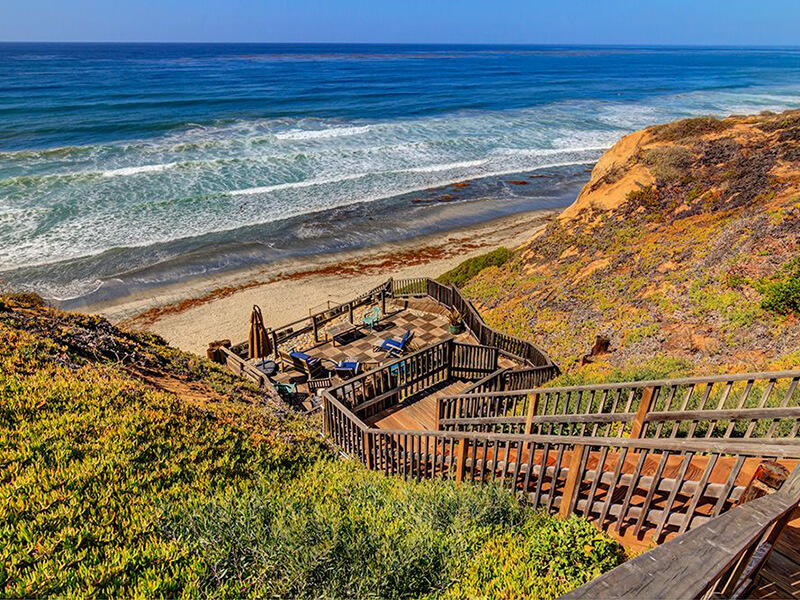