GET A QUOTE
Home
About Us
Services
Areas We Cover
Contacts
Emailchiefmovingsd@gmail.com
Phone numbers(858) 228-7900
Get a Quote

Del Mar is a beach city in San Diego County, California, incorporated on July 15th, 1959. Del Mar is Spanish for “of the sea” or “by the sea,” which reflects its location on the coast of the Pacific Ocean. The Del Mar Horse Races are hosted on the Del Mar racetrack every summer. In 1885, Colonel Jacob Taylor purchased 338 acres (1.37 km2) from Enoch Talbert, with visions of building a seaside resort for the rich and famous. The United States Navy operated a Naval Auxiliary Air Facility for blimps at Del Mar during World War II. The population was estimated at 4,347 in 2018, up from 4,161 at the 2010 census.

​​Del Mar is one of only two locations where the Torrey Pine tree naturally occurs. The Torrey Pine is the rarest pine in the United States—only two populations of this endangered species exist, in Del Mar and on Santa Rosa Island. The Soledad Valley at the south of Del Mar severs two colony segments.

At the southern edge of Del Mar is the Los Peñasquitos Lagoon. To the north is the San Dieguito Lagoon and the San Dieguito River, which empties into the Pacific Ocean at Del Mar. The bluffs along Del Mar’s south beach are subject to collapse. 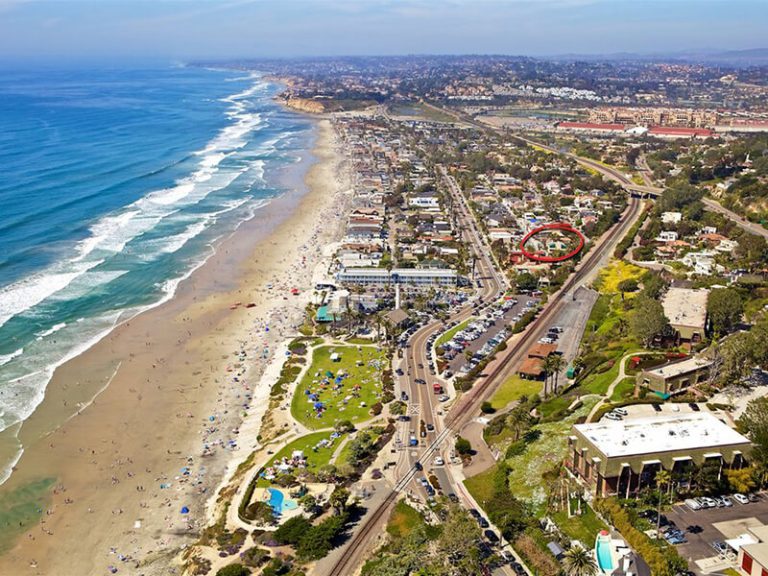